Last month we were honored to be on the main stage at the Advertising Research Foundation’s Re:Think 2015 Conference, sharing with the nation’s top research and advertising executives insights from our work with Wells Fargo.

I use the word honored for two reasons. First, we were selected from over 200 entries for one of the most high-profile showcases in the world. Second, we worked in close partnership with an outstanding team of research and PR colleagues at Wells Fargo.

So in case you missed it, in this newsletter we recap our 2015 ARF presentation, Sync Your Message with Social Change.

This section features, among other news, highlights of our research featured in The Huffington Post, Forbes, and US News & World Report.

Sync Your Message with Social Change

How can you use surveys to create news hooks and drive media campaigns?

First, put the kibosh on sensationalistic or silly surveys. Opt for something authentic and worthy of real research. Second, think carefully about timing, content, and storyline outcomes. These are three essential elements to a successful survey for PR.

Here is a case study of our work with Wells Fargo, which we presented at the Advertising Research Foundation’s annual Re:Think conference in New York last month. It highlights how Wells Fargo catapulted their media coverage with a truly winning campaign and is followed by a full transcript of the talk.

Versta Research: Once upon a time, not long, long ago, same-sex couples could not get married in the United States. Then, suddenly, everything started changing. First it was one state, then two, three, and four. Then it was five states, then six states more. 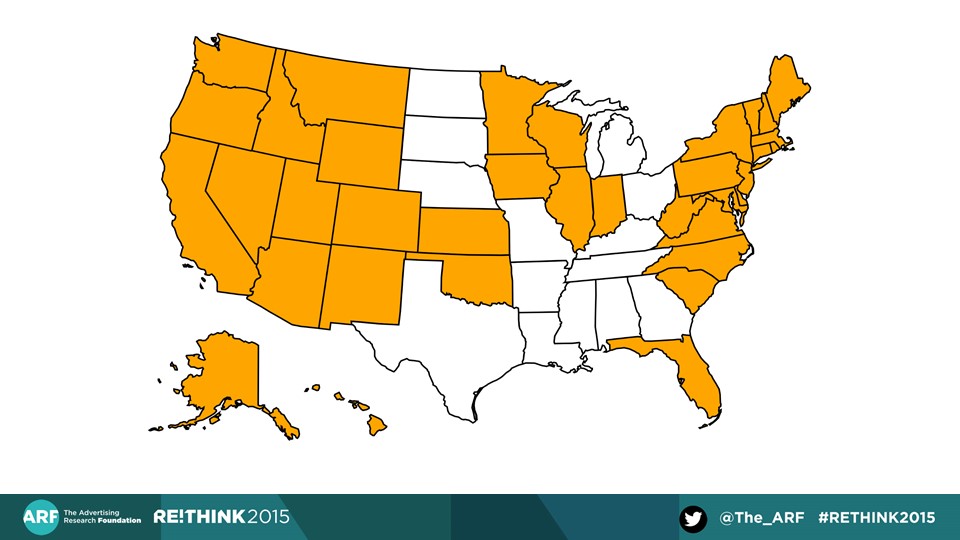 My name is Joe Hopper and I am president of Versta Research, a market research company in Chicago.

Wells Fargo: My name is Roxanne Gray, and I am vice president of market research at Wells Fargo. Today we’re going to share our story. It’s a story of how Wells Fargo built an innovative and incredibly successful earned media campaign around same-sex marriage.

On June 26, 2013, the Supreme Court repealed the U.S. Defense of Marriage Act or DOMA. This is important because it allowed married same-sex couples access to most of the federal rights and benefits enjoyed by heterosexual couples. We decided that the one-year anniversary of this decision would be the perfect time to highlight our expertise in helping same-sex couples with their finances in this complicated legal landscape.

Wells Fargo is one of the largest financial services companies in the United States. We do business with one in three U.S. households. And for the third year in a row, Wells Fargo was named the 2nd Top Company for LGBT Employees by DiversityInc.

Our commitment to diversity is a big part of who we are as a company. It’s part of our fabric, the Vision & Values of Wells Fargo. It states: We value and promote diversity and inclusion in every aspect of our business and at every level of our organization.

“Our goal was to build a story platform for
marketing and brand positioning that is relevant
to the LGBT community.”

Our goal was to build a story platform for marketing and brand positioning that is relevant to the LGBT community. We wanted to probe areas that are important to our business and that help us understand our customers. And we wanted to generate media coverage with new insights about LGBT investors to highlight our expertise in this area. We worked closely with our LGBT segment leaders and PR team to ensure we were all on the same page in terms of strategy and direction.

To this end, we posed new questions about same-sex couples and their perspectives on money, marriage and family. We asked:

We asked A LOT of great questions.

Versta Research: Here are the nuts and bolts of the research. We surveyed 875 LGBT Americans who had at least 25,000 dollars in investable assets. We then worked with three sources of benchmark data at the back end to ensure we had a balanced sample in terms of gender, sexual orientation, relationship status, and assets.

But just as important was the process we used in thinking about the story. And that’s such a critical piece because we don’t know what the story is going to be, but we need to make sure we end up with a story.

So the first thing was to think about the story—not about data, not about numbers, not about a survey. And to do that, we started writing dream headlines. If we could make the data say whatever we wanted, what would we make it say? That helped us work backwards to topics and then survey questions. For every question we then laid out hypotheses. “How do we think people are going to answer this one?” And if they answer it this way, what’s the story, and if they answer it that way, what’s the story? And if we can’t find a compelling story both ways, we toss it out. Last, we assessed all of our measures for simplicity of reporting. We can’t report zero to ten scales, for example, we can only report numbers like “75% want to get married.” 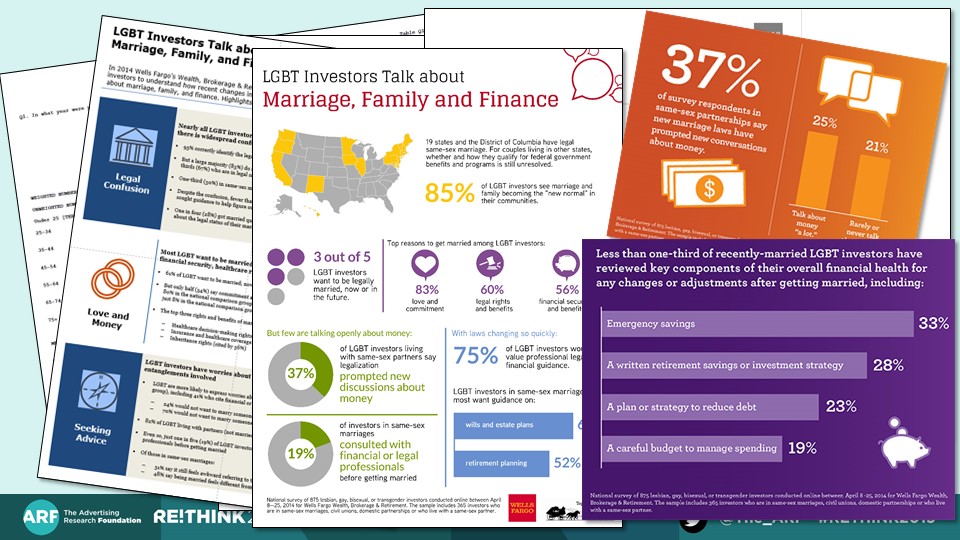 Then when we had all our data, we went in the opposite direction, but each step was about building the story. So we started out with a sea of numbers and cross tabs and significance tests. Then we created a headlines report where numbers are supporting the words of a storyline. Then came press releases and fact sheets, infographics, collateral for social media and business presentation decks, and so on.

Wells Fargo: So what did we learn? First, we learned that Change Means Opportunity. Most LGBT knew whether same-sex marriage was legal in their state, but there was confusion about the how the laws apply. They had worries about marriage, including financial and legal entanglements.

The study highlighted a compelling need for financial guidance, and this gave Wells Fargo an opportunity to reinforce its LGBT offerings and position itself as the leading financial voice to the LGBT community.

Second—and this was really critical and where our PR team knew exactly what they were doing—we learned that Timing Is Everything. The storylines captured intense media interest because we launched the effort on the anniversary of an historic Supreme Court decision. Plus, we’ve been able to leverage ongoing interest as marriage laws continue to change daily, state by state.

Versta Research: The third thing we learned was that The Story Matters Most. Here we’ve taken some inspiration from a terrific book called Math Curse. It’s about a girl in school who realizes that everything can be looked at with numbers, and she gets lost in a zany world of mathematical problems. Here she is at breakfast under an umbrella as she contemplates: How many quarts in a gallon? How many feet in a yard? How many yards in a neighborhood? How many inches in a pint?

Remembering that the story matters most helped us avoid math curse. We thought about the story strategically even before laying out a research approach. We designed all pieces of the research so that the story didn’t get washed away in a sea of numbers. We focused on the stories we saw in the data about how real people were experiencing dramatic social change. 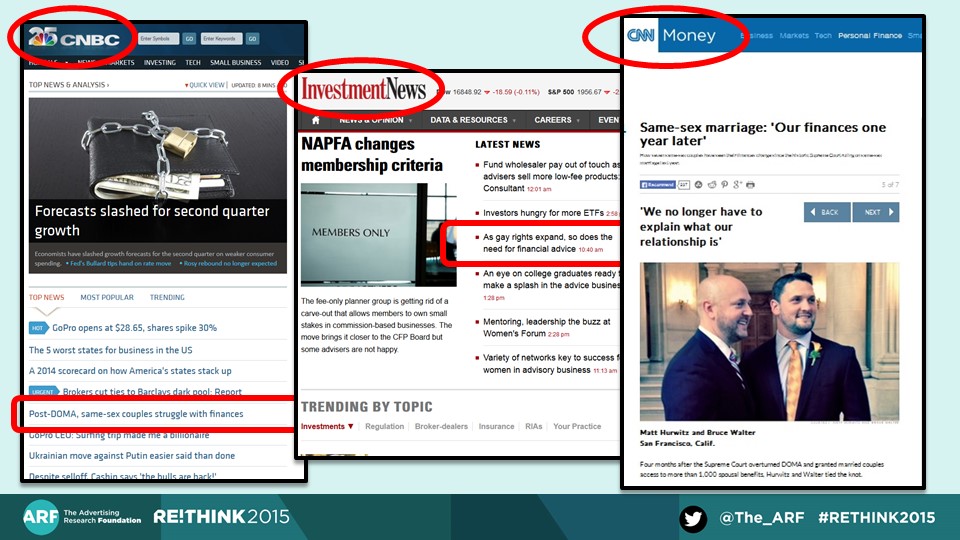 Wells Fargo: The story was released to the media at the end of June, 2014. Within three weeks the research gained 228M media impressions, nearly 400% higher than our study from the previous year. Coverage included front page stories on CNN and CNBC, Bloomberg, Fortune, MSN Money, and many others.

Here’s one example of a video from The Street.com where a Wells Fargo spokesperson was interviewed to offer expertise and commentary. [Partial video clip is played.]

As the interview continues we do start hearing numbers. [Partial video clip is played.] So, the numbers do matter. We had to get them right. It’s new, it’s interesting. But the numbers serve a story-building purpose. They prove the point. They are evidence that this story is true.

The final part of the interview is where all the research leads, and it’s the big payoff for Wells Fargo. The story is not about the survey and not about those numbers we spent months laboring over. It’s about what Wells Fargo offers and how it can help. [Final video clip is played.]

All of us at Versta Research are exceptionally proud of the work that we did for Wells Fargo, and of the ARF presentation excerpted above. It is proof positive that statistics and data and rigorous methods need not be dreary affairs. On the contrary, when done correctly, they yield compelling success stories that truly get noticed.

How to Keep Innovating Your Research Methods

We find that some of the best resources for learning about new methods and technologies are found in academic journals that help separate hype from reality.

Squeezing More from Your Open-Ends

If you want survey respondents to give rich details or multiple answers to open-ended questions, then pay careful attention to how you “cue” them with answer formats.

Recent research links viewer brain activity during TV shows with Twitter volume as those shows are broadcast, suggesting new ways to use Twitter for market research.

Getting Your Ad to Light Up My Brain

One reason neuroscience feels like a compelling approach to concept testing is that brain imagery enhances our belief in the scientific credibility of research.

The Best Place to Learn All Things Data

Sugging and frugging are bad news in market research, which is why we’re glad the FTC just fined several companies more than $7 million dollars for doing it.

How Would Hemingway Present Your Research?

Hemingway said that omitting material can make your writing stronger, and there’s evidence that this is true for market research reports and presentations, too.

Stat Testing: A (Too) Easy Crutch

Using stat testing as a short cut for exploring subgroup differences in data is a bad habit, because it cannot tell us what we really want to know.

Our Pricing Is Always Divisible by 25

Here’s a super-nerd cartoon from xkcd that’s perfect for your market research friends who like to use flimsy 90% confidence intervals.

Testing Your Data for Illusions

Statistical significance is not about “how big” or “how important” but rather “how real.” It tests whether the patterns you see in your data are illusions.

Wells Fargo has published a white paper from the research we did for them about affluent women and retirement.

Our collaboration with Brilliant Ink on a new Employee Experience Assessment tool continues to make headlines.

Discover Home Loans continues to release findings from the survey we conducted for them about homebuyers and technology, which was also recently featured in The Huffington Post.

Creating IT Futures has published a white paper from the research we did for them about teen views of tech careers, which was recently featured in an article by Forbes.