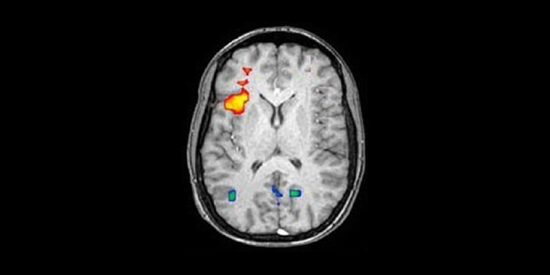 Getting Your Ad to Light Up My Brain

Having just returned from giving a presentation at the Advertising Research Foundation’s annual conference, Re:Think 2015, I learned that ARF’s “Ground Truth #2” is that brands are built in the brain.  As such, the ARF has invested a good deal of time and money over the last decade exploring ways that neuroscience can be applied to consumer behavior and ad testing.  Not surprisingly, the expo area of the conference teems with vendors who want to bring the magic of neuroscience to market research.

The on-site demonstrations of neuroscience research in action are fascinating and compelling.  Who wouldn’t be impressed with an ad video overlaid with in-the-moment measures of our faces and eyes as they register interest or disgust, or in-the-moment measures of our brains as they presumably “encode into memory” the brand being pitched?  Despite my skepticism, I found myself drawn to the idea that you don’t need to ask people what they think, you can just measure it directly.

But thanks to a conversation with Dr. Laura Shneidman, a psychologist colleague at the University of Chicago, I was reminded that images and graphics of brain activity make neuroscience compelling even if the claims and findings are false.  Laura pointed me to findings from an experiment published in Cognition:

The use of brain images to represent the level of brain activity associated with cognitive processes influenced ratings of the scientific merit of the reported research, compared to identical articles including no image, a bar graph, or a topographical map. This effect occurred for fictional articles that included errors in the scientific reasoning in the articles, and in a real article in which there were no such errors. The present results lend support to the oft mentioned notion that there is something particularly persuasive about brain images.

Indeed, this is what I felt happening as I watched the various demos.  The face, eye, and scalp gizmos were surely measuring something.  And because that “something” was so effectively tied visually to my notion of brain, I was impressed, and ready to believe that they were actually measuring ad effectiveness.  But are they really?  The researchers continue:

It is important to note that while brain images give the appearance of direct measurement of the physical substrate of cognitive processes, techniques like fMRI measure changes in relative oxygenation of blood in regions of the brain, which is also indirect.

Of course none of this means that neuroimaging doesn’t add value to market research.  If neuro testing will bring new interest and new insights into why some marketing materials work and others don’t, great.  But hang on to your healthy dose of skepticism, as well.  Neuroscience data visualizations make us believe we are looking straight into consumers’ emotional and cognitive processes, lighting up our own little brains, and well, persuading us to buy neuroscience approaches for our next market research study.