Earlier this year we trumpeted the idea of corporate research groups helping internal business partners do their own research. Sometimes is makes tons of sense, and sometimes not. So when it comes time for something more complicated, how do you educate a client about what matters and what doesn’t in terms of quality and rigor?

This section features, among other news, information about our LIMRA presentation on infographics and the latest news about research we did for Wells Fargo and Teva Pharmaceuticals.

Add a Star to Your Survey 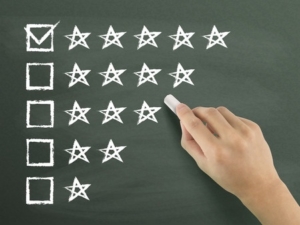 Surveys have gotten easier and easier, and worse and worse, and perhaps the two go hand in hand.

With so many powerful and inexpensive tools available, even people challenged by science and statistics can now distribute polls, crunch numbers, extract metrics and report “insights.” So they churn out lots and lots of surveys (and we do, too). Some of the results are good, some are okay, many are terrible. While I like to think that none of our work is terrible, sometimes we are tasked with the impossible: trying to fix or improve a survey when other parts of the work are fundamentally flawed.

But it’s worth understanding what makes for great surveys versus okay surveys versus terrible ones because we learn from the disasters as well as the triumphs. The disasters are one star surveys. Surprisingly many organizations do them, and we stumble upon them every day. The triumphs are five star surveys. Few organizations do them (and for good reasons) but they provide superlative standards that we can emulate.

Five star surveys are the gold standard for what all surveys could be if only we had the time and money. Think U.S. Bureau of Labor Statistics, or the U.S. Census Bureau’s American Community Survey. Several large, academic research centers, most often funded through large federal grants, produce surveys of this caliber. They are characterized by:

Even if you never come close to fielding a five star survey yourself, it is important to know about them. They provide amazing public resources you can use in your own work, and they set methodological standards against which all other surveys should be measured.

Four star surveys are the five star wannabes, and that’s a good thing. They come as close as they can, with $30K instead of $3M, and with eight-week timelines instead of two years. They are characterized by:

If you are serious about investing in research, have important decisions to make, or important markets to reach, then a four star survey ought to be your goal. Who does four star surveys? The Pew Research Center, Versta Research, Gallup, Harris, Ipsos, GfK, NORC, and other research groups (maybe your group, too?) that have a sincere focus on bringing scientific social research to business.

Three star surveys offer rough, quick, and dirty quantitative views of a market. They can be valuable in the right circumstances. But most three star surveys masquerade as being more, in part because those who are conducting the surveys are not fully versed in the statistical and fieldwork issues that underlie more rigorous research. We consult for many firms who do these surveys, and we are always surprised that few understand how flimsy they are.

Three star surveys are characterized by one or more of the following:

We did one of these surveys two months ago, but our objective was clear and limited: we needed a rough idea of brand awareness and purchase frequency to estimate costs for a larger survey about new products. Indeed, three star surveys can deliver a general sense of your market and give direction for better research (if needed), but please don’t rely on them for decision-making or for building credibility.

A survey we came upon recently described having to recruit “like crazy” to achieve “a statistically significant dataset.” How did they do it? By reaching out to all of their friends and contacts, which was cool because contacts turn into leads and sales. And then the survey results “drive traffic, shares, and likes” which was the goal of their research.

This is a two star survey. The authors get credit for picking a topic they believed in and wanted to learn about. But otherwise, two star surveys are characterized by:

If you care about quality, two star surveys are, in some ways, more depressing than one star surveys. They perpetuate ignorance and misunderstanding. They bumble along, ignore best practices, and declare false conclusions. But they are wrapped in sophisticated language that sounds semi-real. In no circumstances should you do them.

If two star surveys are so bad, is there anything left for a one star survey? Yes. One star surveys embody willful disregard, even mockery, of what surveys can and should be. They deliberately employ worst practices to grab attention from respondents or from an audience.

You know those offensive questionnaires you get from your congressional representatives asking if you support a strong America or a weak one? Those are one star surveys. They are characterized by:

Politicians aren’t the only ones promulgating one star surveys. We saw one several weeks ago in the New York Times Magazine about cursing in conversation. I have the print version in front of me, but it seems to be absent from any kind of online archive. Maybe the New York Times staff, too, realized how embarrassingly bad it was?

The implications of all these stars matter. If your business partners are making decisions, you want them referencing rigorous data. If they are publicizing research for thought leadership, you want to bolster their credibility. A survey, by itself, does not guarantee either.

So how do you kick things up a notch and add a star to your survey? Put more expertise and depth of scientific knowledge behind it. Add another level of rigor to its design and execution. Focus a bit more on the importance or relevance of the topic being explored. Communicate the story that the data tell. Emulate five star surveys. Aim for four star surveys. Avoid most of the rest.

If you offer survey respondents a chance to win a prize in a randomized drawing, your survey becomes subject to federal and state laws regarding sweepstakes.

Here is an amazing, free resource if you ever need to link your market data to Census data: Quarterly zip code and census tract mapping files from Uncle Sam.

And You Thought Focus Groups Were Expensive!

Looking for innovation in qualitative research? How about improvisational comedy. It might make you laugh. For sure it will make you cry when you see the price.

Try to Untangle This Knot of Numbers

Even the fanciest professors writing in the fanciest newspapers have trouble turning research data into clear and compelling stories, as this example illustrates.

What If People Say No to Your Research?

Every survey vendor should be well-versed in current knowledge about people who refuse to take surveys, and they should know how to address it. Here’s the latest scientific review.

New data shows that for many products and services, even ecstatic, loyal customers will give low recommend scores, limiting the utility of an NPS approach.

The Census Bureau’s annual survey of Americans is always under attack from blathering politicians, but it is vitally important to all of us. Here’s why it matters.

Talking about Infographics at LIMRA

Just back from the LIMRA conference: Here is a super snazzy infographic handout from our presentation on “How to Create Spectacular Infographics for Market Research.”

There are many conflicting, inconsistent ways to define generational cohorts like Millennials, Boomers, and Gen Xers. Here are some solid definitions we recommend.

Most Internet browsers have tools to simulate how web pages will look on mobile devices. Here is an example using Chrome to ensure that your surveys adapt correctly.

Yes, You Can Use Grids on Mobile Surveys

Don’t get rid of grids just because you want to optimize for mobile. A good survey platform can adapt them brilliantly, as shown in this example from our platform.

LGBT Views on Money and Marriage

Versta Research conducted a survey of LGBT Americans for Wells Fargo in advance of the Supreme Court ruling on same-sex marriage.

A Versta Research survey about prescription drug abuse for Teva Pharmaceuticals, the American Academy of Pain Management, and the U.S. Pain Foundation offers insights about new challenges in pain management.

Versta Research has been working with the General Board of Pension and Health Benefits of the United Methodist Church since 2009 to understand and track clergy health. The 2015 research results are now available.

Insights on Infographics Presented at LIMRA