Finding the Story and Getting It Noticed

In the months leading up to this year’s Supreme Court ruling on marriage equality, Wells Fargo worked with Versta Research on a national survey of LGBT Americans. The goal was to understand how changes in marriage laws were affecting decisions about money and marriage.

What did we learn about LGBT Americans? Here are two nuggets reported by USA Today: 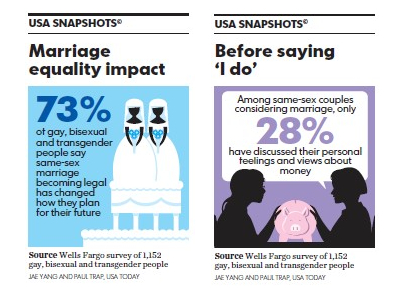 What did we learn about getting research noticed and making a business impact? We will share all of our learnings and insights at the 2015 Corporate Researchers Conference in St. Louis, October 5-7. Here is an overview of highlights:

The session with Wells Fargo is on Monday, October 5 from 4:00pm to 4:40pm. Here is the description from the conference program:

This session isn’t about finding stories in research. It’s about designing surveys that ensure compelling storylines . . . regardless of how the data falls out. Like many researchers, you want market research to generate leading-edge insights, the kind that capture intense audience interest. This story-building methodology will get you there, from conceptualizing the research and constructing stories from data to reporting in the form of headlines, each substantiated with a sequence of data.

We hope to see you there!