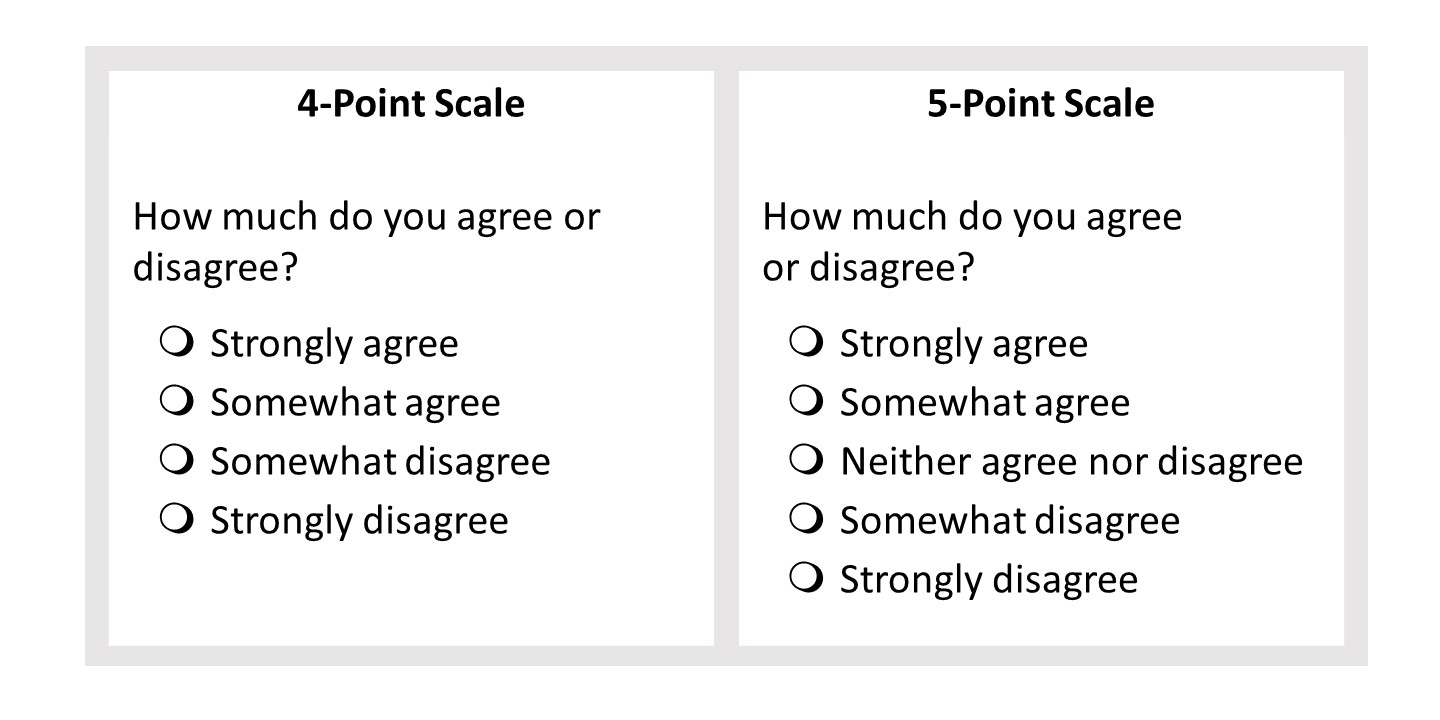 Why You Need 4-Point Scales

One of the “best practices” for survey research I learned in graduate school and then early in my career is this: Survey measurement scales should have at least five points. Presumably that provides enough room for variation, and it provides a neutral midpoint as well.

But it is not true. Or, like all best practices, it is not always true. In market research, and especially in research designed for PR or other types of communications, four-point scales often work better, and here’s why.

Four-point scales can be evenly split into simple dichotomies: Top-two-box vs. bottom-two-box. You can report how many agree vs. how many disagree, how many are interested vs. not-interested, how many are likely vs. not likely, and so on. This makes it easy to report one number simply and directly without misleading your audience.

With a 4-point scale, the statement “one in five (20%) agrees” correctly implies that four out of five disagree. But if you have a five point scale, you’ll probably have to qualify your statements in complicated ways. One in five (20%) agrees … but wait! … that doesn’t mean the rest disagree, because a bunch of people said neither agree nor disagree … it’s complicated.

Does this distort the truth if people are forced into non-neutral choices? No, not necessarily. Many survey questions can be written so that everyone will or should have an opinion. Offering neutral options allows them to move on without giving careful thought to the question. There is a large body of research showing that this is a bad idea.

You can confirm this with your own empirical tests, as well. Go ahead and test what happens if you let people say “neutral” and then follow up with a nudge: “Well, which way do you lean?” Nearly all will say they lean one way or another, and the proportions going either way will end up being consistent with a comparison sample of those who did not have the neutral option.

To be sure, sometimes you need more nuance than a 4-point scale provides: maybe for strategic research or if you’re trying to parse out causal effects. But just as often your boss or executive committee, or the press reporter who is interested in your story wants “one number” or a simple dichotomy to report (how many agreed vs. disagreed, for example). That is when four-point scales are ideal.

How to Label Your 10-Point Scale

The Slippery Slope of Slider Scales