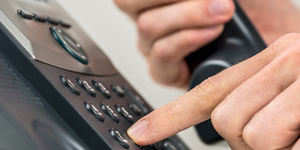 Despite the welcome trend towards online polling, telephone surveys are still surprisingly common, and telephone outreach makes sense for certain types of research. But if you ever use or commission phone surveys, take note: do not use automated dialing to make calls. Instead, have interviewers manually dial the numbers so you don’t get caught in a lawsuit like Gallup just did.

Gallup recently agreed to pay up to $12 million to settle a class action suit alleging that it violated the Telephone Consumer Protection Act (TCPA). As the Marketing Research Association (MRA) notes:

The TCPA is of intense interest to survey, opinion and marketing researchers because it requires express prior consent to use an automatic telephone dialing system (autodialer) to call a cell phone. In the second half of 2014, 60.3 percent of American households could only or largely be reached by telephone via a cell phone. . . . Penalties run from $500 to $1,500 per violating call. Multiplying these costs exponentially, trial lawyers in recent years have discovered that researchers can be and are a lucrative target for TCPA class actions.

Moreover, a recent FCC ruling explicitly noted that calls for bona fide research calls are not excluded. And the ruling covers any type of automated text messages sent to cell phones, as well.

Just today CASRO (the Council of Survey Research Organizations) and the MRA joined in a lawsuit seeking to clarify and narrow the definition “autodialer” to better protect marketing research efforts. We hope they succeed. But in the meantime, avoid your own lawsuit. Dial your phone surveys by hand.