Survey response rates are now staggeringly low—in the single digits.  A typical response rate for a relatively high-budget, carefully executed phone survey is merely 9%, down from 36% just fifteen years ago.  Here are the numbers from research conducted earlier this year by the Pew Center: 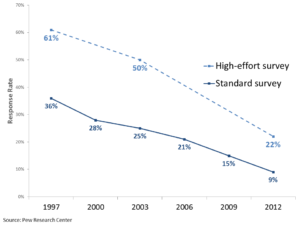 If you want to throw money at a survey and try really hard to boost your response rate (the high-effort survey shown in the chart above), you can likely get up to 20% to 25%.  But you will need to:

Is any of this worth it?  No.  Because it turns out that response rates just don’t matter.  People who don’t respond to surveys think and behave just like the people who do respond to surveys.  Even with a meager response rate of 9%, the Pew Center’s sample ended up closely mirroring the U.S. population in terms of gender, age, race, citizenship, marital status, home ownership, health status, social behaviors, political attitudes, and use of social media.  Nine percent is good enough.

Despite declining response rates, telephone surveys that include landlines and cell phones and are weighted to match the demographic composition of the population continue to provide accurate data on most political, social and economic measures. This comports with the consistent record of accuracy achieved by major polls when it comes to estimating election outcomes, among other things.

The reality for most research is that response rates are not high.  And yet our findings are still accurate. What matters is not how many people respond, but how representative they are of the groups to which they belong.  Assuring representative samples is not necessarily easy, however.  How to do that is a topic for another day.

For additional information, see this article:  Do Response Rates Really Matter? And feel free to give Versta Research a call with any questions you may have about sampling, response rates, and survey accuracy.