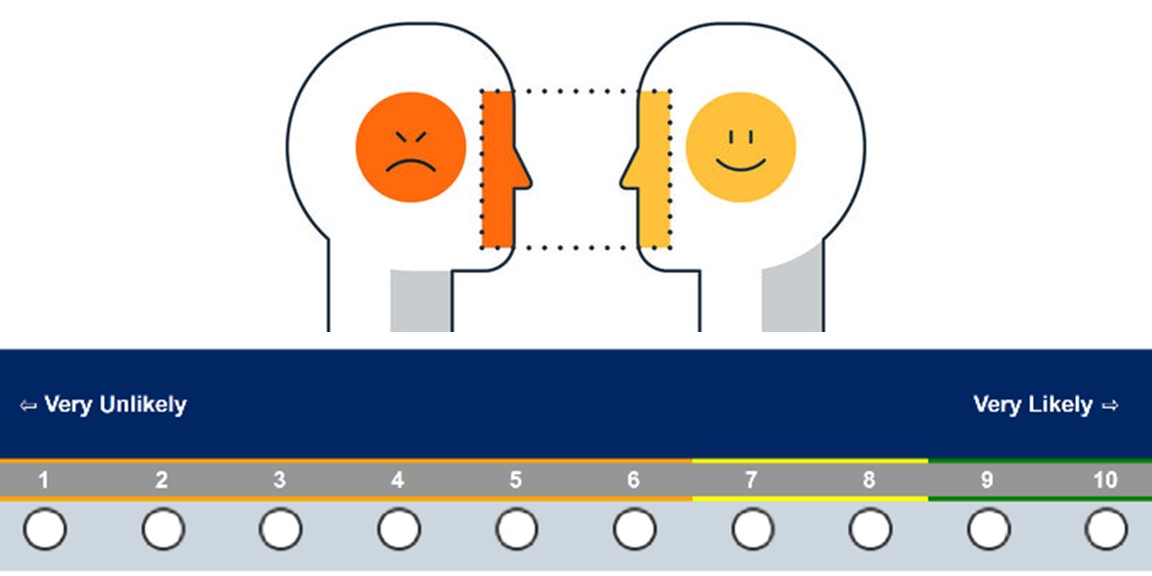 The online customer satisfaction survey I received today had me noticing an unfortunate side-effect of the NPS (Net Promoter Score) schema and visual imagery.

For those of you unfamiliar with NPS as a way to measure and track customer satisfaction, here is how it goes. In your survey ask: “How likely are to recommend Acme to your friends or colleagues? Please answer on a zero to ten scale where zero means not at all likely, ten means extremely likely, and five is a neutral score.” Now take the percentage of people who give you 9 or 10. Subtract from that number the percentage of people who give you 0, 1, 2, 3, 4, 5, or 6. Voilà. You have your Net Promoter Score.

There is a visual scheme the owners of NPS have adopted to explain it, as well. Here is it, with this image from their website:

The problem is that some people who manage NPS surveys now present this visual scheme to customers who are taking their surveys, which is likely to bias their answers. Here is the answer scale for the question I received:

The color-coding of the numeric scale is what stands out here. Color-coding the scale should not be done. It clearly signals to respondents which numbers are considered good, cautionary, and bad. Respondents should instead be focusing on the idea of recommending and the full continuum on which they can answer.

This example also illustrates other problems and mistakes in using NPS. First, this scale uses one to ten, instead of zero to ten, which likely inflates the NPS. Second (and because it goes from one to ten) there is no neutral midpoint. Third, the text labels are incorrect, and there are good reasons for labeling exact endpoints with language more extreme than “very.” Fourth, there should not be a “don’t know” or NA option because respondents who cannot answer this question should not be getting the question at all.

Color-coded visualization is great for analysis and reporting. It will help your management understand the mechanics of NPS. But showing it to your survey respondents is a big mistake. It creates a bias in measurement, which defeats the purpose of tracking customer satisfaction in the first place.

9 Is Not Fine with NPS Scores

How to Calculate an NPS Margin of Error

Two-Point Scales Have the Highest Reliability